Sign in to rate
Share
Full replay from the Wembley Arena as China's Lin Dan defeats Korea's Lee Hyun Il to advance to the final of the men's badminton singles event at the London 2012 Olympic Games (3 August 2012). Subscribe to the Olympic channel: http://bit.ly/1dn6AV5 Badminton made its debut as a demonstration sport at the 1972 Olympic Games in Munich. It was not until the 1992 Games in Barcelona that it was officially included on the Olympic programme, with men's and women's singles and doubles events. The mixed doubles event made its debut in 1996 at the Atlanta Olympic Games. Since then, the number of events has remained unchanged. Find more about Badminton at http://www.olympic.org/badminton
Related Topics
Video Center
Video Details 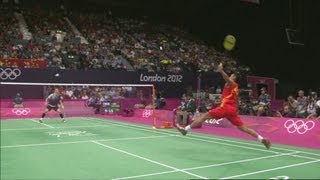